I'm starting with the "after" picture.

I purposely waited until our second week of treatment to post a blog update for a couple of reasons, but primarily because I believed that John would allow me to share "before" and "after" photos of his neck once he was feeling (and looking) a little better. I had a hard time convincing him even to let me take a picture of him one week ago.


After a month without any treatment, John's lymph nodes had become bulky throughout his body. His white count had increased and platelets were down. But his blood has never been where his CLL prefers to "hang out." John's chronic leukemia has always behaved more like a lymphoma, with the unhealthy white blood cells proliferating in his lymph nodes.

*For those of you who are unfamiliar with CLL or just beginning your own CLL journey, CLL stands for Chronic Lymphocytic Leukemia. The unhealthy white cells are lymphocytes. They are generated in the bone marrow, but travel and congregate in the blood and lymph nodes. Since they are unhealthy cells, they do not function as they should. And one of their dysfunctions is that they lose the ability to die off after fulfilling their purpose (fighting infection), as healthy lymphocytes do. This process of cell death is programmed into the DNA of healthy cells. Its clinical term is apoptosis. So, not only are these unhealthy/malignant cells compromised in doing their job, as they multiply they can crowd out the healthy cells. Subsequently, a CLL patient can experience anemia (low HG/RBC), neutropenia (low neutrophils) and/or thrombocytopenia (low platelet counts). There are a variety of ways CLL can affect you and your health. And not all patients progress along one specific path. Some patients have a very indolent CLL that never requires treatment. Others have an aggressive CLL. And then there are patients in the middle, like John. He has neither the indolent nor the most aggressive CLL on the spectrum.

John's first abnormal CBC was April 2007. He was officially diagnosed with CLL in June. He started out in watch and wait. He received Rituxan (monoclonal antibody) as his first treatment in 2008. He received FCR+lumiliximab in 2009/10 (a chemo combination trial, lumi was the experimental drug). FCR was then the gold standard CLL therapy, but John failed to respond. His lymph nodes were reduced by about half while receiving the drugs, but came right back in force as soon as the six months of infusions were concluded. That trial was studying the addition of lumi to hopefully enhance the results of standard therapy FCR. It did not prove to be a helpful addition.

In May 2010, John was enrolled in an early clinical trial with CAL-101 (now Idelalisib) as single agent. He began at the lowest dose (50 mg./2X daily). He graduated to 100 mg. and then 150 mg. over time, staying in remission for the next five and a half years. But last year John developed chronic pain and, after ruling out any possible unrelated health issues, it was determined that his pain was drug-related. So, on December 23, John stopped taking Idelalisib cold turkey. He then pushed through a full two weeks of withdrawal sickness and a month of his CLL flaring (mostly in his lymph nodes, as you see in the above photo). And on January 25, he was able to start his new clinical trial with Gazyva (aka Obinutuzumab) and Venetoclax (aka ABT-199).

I thought I would never learn to say Obinutuzumab, but I find it now just rolling off my tongue. (I love how just being able to say the name of these drugs impresses people.)

John received 1/10th of his initial dose on Monday, very slowly. And then he received the remaining 9/10ths on Tuesday. Infusion days are long; especially the first two.

Those first infusions are given extra-slowly as patients typically have some sort of reaction. And when they do, the drip is stopped while the reaction is dealt with. John had only one reaction on Day #1 -- uncontrollable shaking/shivering. He was given Demerol. His body relaxed. He then continued with the infusion uneventfully.

Pre-meds of IV Benadryl, Decadron and Tylenol help to minimize reactions. Most reactions occur with the first infusion. Since John did fine he only had to have half as much Decadron this week. And on his third infusion, he may not have to have any at all. John struggled to sleep for several nights after last week's infusions and we think it was probably the steroid. From my recent reading (other patients' experiences), fatigue seems to be a side effect of Gazyva (especially early on) and John has experienced plenty of that. But we are pleased with his progress.

I can usually gauge how bad he feels by how much or how little he talks. Yesterday he was a lot more talkative and looked better too.

Next week will be our third infusion day in the office clinic. On February 15, John will begin receiving Venetoclax along with his fourth infusion of Gazyva. And that's when our routine will change again. After the fourth infusion of Gazyva, John will only receive a monthly infusion through June. But for the first five weeks of Venetoclax, he will spend a couple of nights in the hospital each week for closer monitoring as the drug is introduced, then gradually increased from a 20 mg. to 400 mg. dose daily.

I've been reading a lot more since we hit this bump in the road and everything I'm reading about these drugs is very exciting. I'm thankful for the continued online support I've received from CLL Christian Friends and the CLL Forum, where I can follow and learn from the experiences of other patients and caregivers. I can't imagine trying to navigate this journey without the support, encouragement, education and camaraderie I've found online. 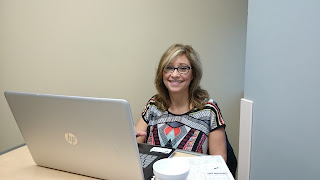 One of my best pieces of advice to other patients is to IGNORE the well-intended WARNINGS about the dangers of online reading you will get from some of your friends. Yes, you might read something that scares you. But I was already scared. I needed to learn how I could be a more helpful and proactive health advocate for my husband (and his mom) as we embarked on the "new normal" of life with a diagnosis.

John participated in his last trial as a direct result of online friendships I formed and advice I received. I knew about CAL-101 because of Randy Shannon (Hotrodder). I was able to do my own research, learn our options, and initiate dialog at an office visit, inquiring about the possibility of John trying that clinical trial rather than electing to proceed to stem cell transplant. CAL-101 changed everything for us and resulted in over five years of progression-free good health for John. Now he's embarking on this new journey with one of the most promising drugs (Venetoclax) on the CLL horizon. While reading patient experiences on CLL Forum this weekend, I found a link to a podcast in which Dr. Flinn (our CLL specialist) was talking about this clinical trial. I felt so fortunate to be in Dr. Flinn's care. It just so happens I initially found Dr. Flinn through online conversation with John Wagner on CLLCF, while I was learning the utmost importance of consulting with an actual CLL specialist before entering into any treatment.

Make sure you're reading reputable sites, of course. But there are lots of ways to confirm that. There is so much information at our fingertips these days; not only information, but equally valuable empathy, encouragement and friendship. That's one of the main reasons I share our journey on my blog (with John's permission). I remember how important patient blogs were to me when John was first diagnosed and each time he has started a new treatment protocol.

I'm indebted to those who have educated me, emotionally supported me, and prayed for us through our journey. I've tried to reciprocate as much as I can by sharing, being a friend, and offering my prayers. But I feel like I will never be able to give as much as I have already received. I now have CLL friends on Facebook and CLL friends in other parts of the world who keep in touch with me. Even though many of these friends are strictly online relationships, I consider them dear friends. We share a common bond. And regardless of whether we share it face to face or computer to computer, the bond is real. I will always be grateful for you, my fellow CLL warriors. 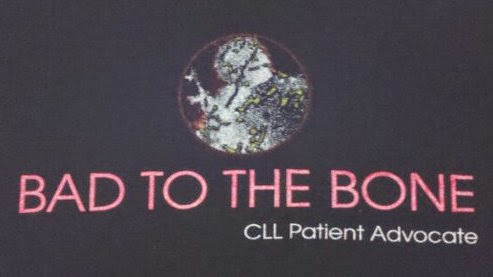 Anonymous said…
Hi shari
, its steve again from the uk .....the results are amazing in the pictures , I know how john feels , my nodes mainly in the neck not has prominent has johns do make me keep away from any photos being taken lol I was once a good looking man too. I am nearing first line treatment after nearly 5 years ....Your really right about on line friends they do make such a difference for support and important info at times .
I am so glad john is ok and mom , must admit perks me up when reading both are ok
best wishes
steve
Worcester
uk
February 1, 2016 at 8:07 PM

Unknown said…
Sherri, although I was sorry we didn't get to meet at Dr. Flinn's office last month I'm glad to hear that John's clinical trial is working so well. The photo's are awesome to see the positive results John is experiencing. Like John my CLL has been overactive on the right side of my neck this past year so viewing the sudden reduction in John is giving me hope that when I need therapy I hopefully will see similar results. I went into to see my ENT doctor last week and again this week for some biopsies and I joked with him about trying to drain my largest neck nodes with a needle and he said "sorry" but those go with the territory of having CLL - and I was hoping for an easy way out, Lol. Give John my best and I will keep checking back on your blog to get regular updates on how John's progress is coming along - I always feel better reading about how someone else is doing so well in their fight with CLL. I hope for John's sake that this leads to total remission soon!

Shari said…
Thanks, Larry! I believe this trial is going to put John back in remission. I'm encouraged and happy about how well he's doing and feeling following the introduction of this new drug to his system. The first hospitalization is now behind us. I'll keep you posted and you stay in touch too. I'm glad you are in Dr. Flinn's care now as well. He's one of the best and you have made an excellent, informed decision in choosing him as your specialist. :)
February 17, 2016 at 3:20 PM