For anyone looking for an update last week, I apologize. I never got around to writing on my blog. It is always a safe assumption that no news is good news. Sometimes there just isn't that much to tell. 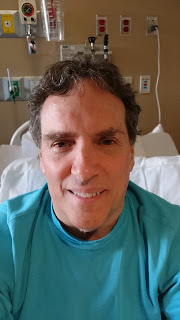 John is doing very well on this clinical trial so far. We just got him settled into his hospital room for Week #3. He will get the next dose increase tomorrow morning. He started out on 20 mg. Last week he graduated to 50 mg. And tomorrow he will start taking 100 mg. of Venetoclax (formerly known as ABT-199). He won't get another infusion of Gazyva (Obinutuzumab) until March 21. He receives those infusions monthly now through June (and then he's done with the infusion drug for this trial).

Lymph nodes are continuing to lessen in size gradually. And his blood counts are responding beautifully to treatment. His most recent CBC in the doctor's office just prior to admission showed improvement from last week.

All counts in normal range except RBC and HCT, but those two are only low by .02. So that is pretty exciting considering he is not yet on the full dose of Venetoclax and won't be for two more weeks. This is the first time John's platelets have been over 200 since November of 2012.

I can't put into words how thankful I am to be at this point in John's transition to new treatment. In two more weeks, John will be on his full dose of 400 mg. By the end of this month, we'll be finished with weekly doctor appointments and he'll have one more monthly infusion under his belt. We'll return every four weeks for an infusion through June. At that point, I think our office visits will be every three months. It's going to be wonderful to return to our normal life. And I'm hoping John gets to play a lot of golf this summer.

As always, we are indebted to our friends for your love, support and prayers!
Email Post
Labels: abt-199 clinical trial cll gazyva obinutuzumab venetoclax