Thankful to be a Wildcats Fan! 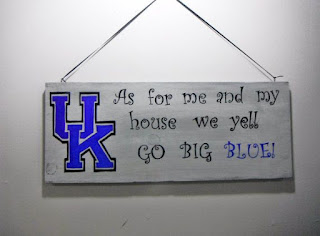 Twelve years ago I became a UK fan by marriage.

John's dad went to Kentucky and played basketball one year for Adolph Rupp. Kentucky basketball is a Howerton passion. John grew up rooting for the Cats. So when we got married, I started wearing the t-shirts. But I wasn't a real fan.


Prior to marrying John, I never watched college sports at all. I was a Lakers fan for many years in LA. But March Madness for me meant making pizza and chocolate chip cookies for Danny and all his friends during his high school and college years. I couldn't have been less interested in watching college basketball.

After we got married, John took me to Rupp Arena a couple of times and to SEC tournaments. I loved going to Rupp with him because of what the place meant to him. Kind of like I have loved going to Cubs and Orioles games with Danny because of his love for major league baseball. But being at Rupp was all about John for me. And I'd rarely care about watching a game on television, even though I did as a "fan by marriage." 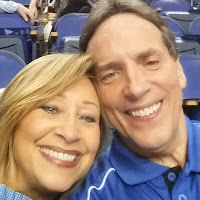 Well, last year everything changed. We went to Lexington multiple times (it's only a four hour drive) and I caught the fever. I knew the players names and sat on the edge of my seat whenever they didn't have a big lead. I started watching every game on television. (I bought nicer UK apparel, earrings and a purse.) I looked forward to each Lexington getaway. 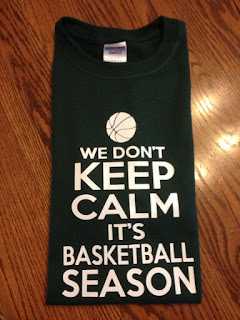 I absolutely love the roar of the crowd's chants in the hotel bar just prior to every game. It's electrifying.

Obviously, the Cats had an amazing season, going undefeated last year. It was fun watching them win every game. It was fun meeting up with my brother-in-law and sister-in-law for games.

It was heartbreaking when they didn't win it all after such an amazing season. But what a ride!

For weeks I have been looking forward to the start of a new basketball season and all the fun we will have watching "our" Wildcats.

I can't believe it took me so long. But my days as a "fan by marriage" only are over. I've graduated to real fan!