Last night, John and I were watching a show on television. There was a moment when an emotionally abusive man (growing more manipulative and threatening with every episode) whispers a few words into the ear of his terrified wife. He says nothing overtly threatening. He doesn't yell or attack physically. But from her body language, the audience senses extreme discomfort. Her fear is palpable. She is intimidated and -- at least in that moment -- powerless to protect herself from him. It was his very presence that triggered her discomfort and fear.

Whether you watch this from the perspective of someone who has never experienced abuse or someone who has, you get it. She has no idea what he might be capable of and she is afraid of him with good reason. But if you have been a victim of emotional abuse and domestic violence yourself, the intensity of emotion is heightened because you relate and identify with her.


It's been more than a decade now since I broke free from an abusive man. I experienced episodes of violence and sporadic incidents of being slapped and shoved around to put me in my place, but the worst abuse I endured was verbal and emotional; rage, mind games, belittling, demeaning, contemptuous words and actions that tore me down on the inside rather than the outside. I know how intimidating even softly spoken words can be. Some of my most painful and vivid memories do not involve a raised voice, but words spoken with calculation to make me feel powerless and worthless. Words that resulted all too often in my groveling.

So when the scene played out, I flashed back. I watched and identified. I didn't say anything to John in that moment, but inside I was thinking, I know how that intimidation feels.

I have no idea if there was a connection between the scene and my subsequent restless night of sleep. I haven't dreamed about my ex-husband in a very long time. (I left him in 2002. He died in 2011.) But last night I dreamed I was married to him again and it was awful. He didn't strike me or yell at me in the dream. He degraded me with his words and showed contempt for me with his countenance. I don't remember specific details about what words were spoken in the dream (which seemed to go on forever) but I always remember how I felt in response to his presence. I felt horrible while dreaming. And I felt horrible when I woke up. Except for one thing. John woke me up to give me a hug.

My feelings are important to him. And he is willing to listen to me when I need to express them. No punishing emotional consequences for needing to communicate how I feel or think.

It's amazing to be loved this way whether you've ever been abused or not. But I dare to say it's more amazing to the woman like me, who has been torn down by abuse. I've told John so many times that nobody could appreciate him more than I do because I know what it's like to have the opposite of our relationship. And I'll never forget.

Flash forward to this morning. I stayed in bed for an hour and watched TODAY after waking up. I felt lethargic as a result of a restless night and my bad dream. I reflected on the past and how long I lived that way (27 years). And then I got a text message: "Shari ... You up?"

"Wanna do a radio interview?"

Our local Women's Resource Center / Shelter is having a fundraising event this Saturday night. GIRLS NIGHT OUT - ON THE RED CARPET. John and I are sponsors of the event and sponsors of the entertainment. So, morning DJ (and our DJ for the event) Will Shumate of WJLS 99.5, along with Dee Sizemore of WRC, wanted to say hello on air and thank me for my/our support of the Women's Resource Center.

Of course I wanted to talk to them and help promote the event!

I came out of my fog instantly.

My first thought was how ironic it was that I'd just dreamed about my abusive ex-spouse prior to this invitation. Maybe not so ironic. Maybe it's not all bad that I still have an occasional nightmare to remind me of where I've been and the opportunities I have today to be an advocate for other women because I truly identify with them. God has brought me through the worst experiences of my life to make me a beacon of hope and light to others. It's a royal position. And I want to make the most of it. 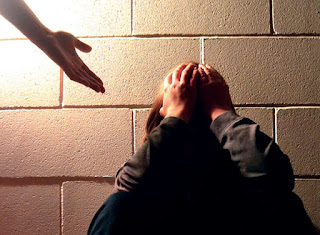 This is the silver lining to all my dark clouds. And I'm grateful. I'm not only grateful that my life today is so very different from what it once was. I'm grateful God has redeemed all those years with the role I now have in helping bring awareness to this issue. It is such a privilege to have this opportunity to contribute something meaningful to the lives of others.

I'm proud to publicly identify myself as a victim and survivor, and most importantly an OVERCOMER of abuse.

Often I hear people say we must forget the past or put it behind us to look forward. I disagree. It's not good to live or camp out in the past, but reflecting helps us appreciate how far we've come. We should never merely forget.

Beth Moore, in her study on Esther, said it this way:

"You cannot amputate your history from your destiny, because that is redemption."

Powerful words combined with this passage of scripture from the book of Esther:

"And who knows but that you have come to your royal position for such a time as this?”

ihs said…
Love this post. It is very much me, except that I have not found that loving and supporting man to share the rest of my life. I still struggle at times from the effects of years of domestic abuse, but I have God in my life and supporting friends. I am in a good place now and nothing can take that away. I at a peace to continue my life journey with God by my side.
Thanks for being a role model and speaking out on domestic abuse. It exists most often behind closed doors. We must never be afraid to speak up and share our experiences to raise public awareness. I look forward to Girl's Night Out and the opportunity to support this worthy cause.
August 6, 2015 at 11:21 AM

Shari said…
Thank you for commenting, Sarah. I look forward to seeing you Saturday night! Thanks for supporting our Women's Resource Center.
August 6, 2015 at 12:43 PM

Anonymous said…
Hi Shari, was researching MN and came across your blog. Great description of the surgery. How are your feet doing 3 years later? Have you returned to how active you were before the MN? What activities can you do and what, if any, restrictions do you have? I have controlled the pain with giving up soccer, running, long hikes and long nights dancing but after a walk on the beach resulted in near constant pain realized I am no longer content with this strategy. More to the point of this blog... thank you for your advocacy for abused women. I lost a good friend to domestic violence. So glad you were able to get out and establish such a wonderful life!
August 23, 2015 at 3:58 PM

Shari said…
Somehow I must have missed this comment back in August. Thank you. My feet are not the same feet I had at a younger age and prior to developing MN. But I consider the surgery a success and I'm not restricted from any activity. I have noticed that my feet bother me more when I eat gluten. That might sound crazy. But it happens every time. They bother me less when I haven't been eating it. I think it's inflammation. Sometimes it feels like I have a little scar tissue trying to form and I try to break it up with a thumper back massager on the balls of my feet. I try to avoid shoes that are not comfortable and easy on my fragile spots. I don't want to develop new neuromas. I am not an athlete, so my weight-bearing activity consists of the treadmill and elliptical. These days, my feet get sore if I am on them too much or don't wear great shoes. But I have none of that severe pain like I had before the surgery. If I developed MN again, I would have surgery again. Same surgeon. Hope that helps. Good luck!
October 26, 2015 at 9:22 AM