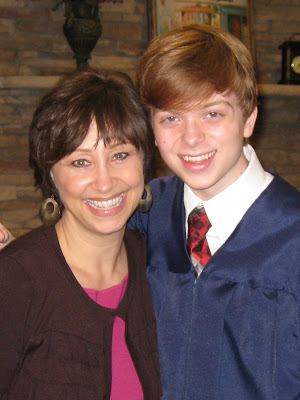 My nephew (Chris & Cheryl's oldest) graduated last night from White House Heritage High School. And I am so proud of him. I wouldn't have missed this graduation for anything.

As you know if you've been reading, John had a bone marrow biopsy yesterday. Even though he did not elect to have anesthesia, he was given a shot of morphine and verced for the minimal sedation, so he was sleepy for the rest of the afternoon and evening. He also had a fresh incision in his hip, which is small but sore. We both agreed he should not go with me (he was disappointed that his biopsy was scheduled for the same day because he had planned to go). It's an hour's drive each way and I know everyone would have understood if I'd decided to stay home with John. But it was so important to me to see Matt graduate.

I took some lasagna out (that I had previously made and frozen in a foil pan) and put it in the oven for John. And then I left early enough to hopefully beat the rush hour traffic. Since it was a Friday, I did hit some congestion going through Nashville even at 4:00 pm. But it wasn't too bad.

Graduation was originally going to be outdoors in the stadium. But there was the threat of thunderstorms. So it was moved to the Northridge church. We got there very early to make sure we had seats and it was already very crowded. By the time graduation started, there was standing room only and some people had to just leave because there wasn't even sufficient room to stand. You can imagine how hot it was in that crowded church filled with way too many bodies. I prepared myself for a long, boring graduation (because they usually are).

What a pleasant surprise this graduation was! I actually enjoyed it! Rudy Kalis was the guest speaker and he did a marvelous job. I was very impressed. I don't know if he would have said all the same things at the stadium, or if he felt more liberty because we were in a church, but that man can preach! It was short, sweet and powerful. I've always thought he seemed like a good guy on television, but I really like him after hearing him speak last night.

Another highlight was when a small group of senior guys took the stage to sing. They were hilarious. One of them played a guitar and he played very well. But they really couldn't sing and they obviously realized it, which made it even better because they were singing anyway and enjoying every minute of it. I wish I could remember the name of the song. It's a song everyone has heard and I knew it. But, at this moment, my 51-year-old brain won't recall it for me! When I do remember, I will come back and add it to this post.

The class was not too large (just over 100) and so the actual procession of graduates receiving their diplomas did not take that long. It was very exciting to see Matt walk across the stage and accept his diploma. It brings tears to my eyes just writing about it. He has worked so hard to graduate on time because he had some health challenges and was home bound for approximately one year of high school. At one point, it looked impossible for him to catch up. Right up to the last minute, he thought he lacked a few credits and would have to graduate in July rather than walk with his classmates. But he did it! And I was just SO proud and happy for him that all of his effort had resulted in this accomplishment. I know it wasn't easy.

I dropped out of high school at sixteen and later got a G.E.D. Few people close to me ever realized how deeply I regretted that decision or how disappointed I was in myself for that decision. I never had a high school graduation and there was a sense of loss over that my entire adult life. It's not that I spent a lot of time dwelling on it. But whenever it was mentioned or I reflected on my decision, I felt embarrassed and ashamed. I carried that sense of loss until I went to college much later in life and received a college degree in 2004. And that graduation ceremony meant so much more to me because I didn't graduate with my high school class.

I missed out on a normal high school experience. I was raised in an oppressive, legalistic, controlling church environment. I was not allowed to participate in school activities. I never got to go to a single football game in jr. high or high school. Games were on church nights and I was not allowed to miss a Friday night service. I was never permitted to go to a dance (even an eighth grade sock hop during lunch period). I would never have been allowed to get dressed up and go to a prom. I was discouraged from having close friends outside my church group. I wasn't able to dress like a normal teenager. It was considered "worldly" and a sin even to wear polish on my nails or toes! But I was allowed to get married at sixteen.

I have never really mourned the things I missed out on that were such a normal, wholesome part of being a teenager. My life is good today and I don't consider those things huge losses in comparison to some of the challenges other people have faced in their young lives. But they WERE losses and they did impact me in more ways than I can count. I believe that all those severe restrictions played a role in my belief that I had only one thing in life to look forward to; marriage. Nobody ever told me I could go to college. Instead, I was told that college took people away from God and the church. I had loving parents who I am absolutely certain wanted the very best for me. But in their minds, the very best life had to offer me was found inside the walls of what I now view as a religious cult. I can remember my parents telling me that I should learn to type because then, if my husband could not support me one day, I could be a secretary. In spite of the fact that I got all A's and B's and excelled at nearly everything I attempted, their highest hopes for me were to be a good typist.

Well, I am a GREAT typist. I have typed 100 wpm since the eighth grade. And my typing skill was a big help to me in writing a book. I have always been glad I took their advice and learned to type. But I wonder what else I might have been able to accomplish if so many limiitations had not been imposed on me at such a young age. I wonder what my life might have looked like if I had been encouraged to do something more than type and get married. At the same time, I don't have regrets. Any other path would rob me of my wonderful 32-year-old son, my daughter-in-law and my precious grandsons. So the path my life took is perfectly fine with me today. But these are all reasons why graduations are so meaningful to me.

Even though yesterday was far from a normal day, including spending the majority of the morning in a surgical clinic, I just could not imagine missing Matt's high school graduation. It was so important to me to be in the audience clapping and cheering for him as he walked across that stage and received his diploma.

Karlie and Lexi teased me last night by asking, "Will you even still be alive when Jackson graduates?" (That's real funny when you are thirteen and fifteen. Too bad I probably won't still be here to remind them of that when they are my age!) I said, "Well, since I will only be 68 when Jackson graduates, I sure HOPE I am still here! They laughed and said, "Just kidding, Aunt Shari!"

I am proud of all of my nephews and nieces. They have always held such a special place in my heart; every single one of them. And I enjoy watching them become adults. I also really enjoy seeing them enjoying being kids and having normal experiences as teenagers; the experiences I missed out on. I did not enjoy being a kid. I just wanted to be a grown up. And being a grown up, to me, meant being married.

I did not want to impose all the same limitations on my son's life that were imposed on mine. I wanted him to enjoy being a kid. I did not want him to miss out on the experience of high school and college and having LOTS of friends. And guess what? Those normal experiences did NOT take him away from God. But he did realize he didn't have to live in a box. And so did I.

Although I realize there are many destructive influences out there that we need to protect our children from, I saw numerous examples last night of kids who are thriving - and already savoring their school experiences and friendships. I was so happy Matt got to graduate with his class. He has been with many of these classmates since kindergarten. And they are going to have some great high school reunions in the years to come.

Tonight we will celebrate this milestone in Matt's life with a small party. I can't wait. I love you, Matt. And I am so very proud to be your aunt.
Email Post