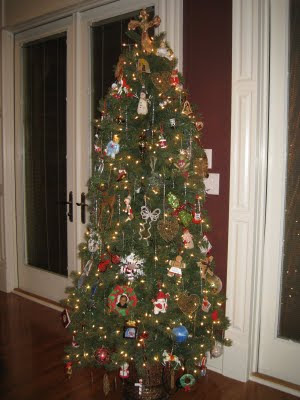 I got the tree up today. I was tempted to skip it altogether this year, but I'm glad I didn't (now that it's up).

I think because of John's treatment I am just not as into Christmas as I normally would be. It doesn't really seem like Christmas to me this year. And I know it's primarily because of what we are going through. The thing is, I am not down. I feel good. I don't feel like I want to skip Christmas. I just feel like I want to skip all the "work" of Christmas. And I think it's because I'm mentally and emotionally tired. A tree did not feel important. We certainly won't be doing any entertaining this year. John and I both have said to each other, "It's not important to me if it's not important to you."

We hope the kids will be able to come over to have dinner and open presents the week of Christmas, but if anybody is even fighting a cold, we will have to cancel plans to be together. I think that was partly why I had a hard time getting motivated. I have had this coping mechanism most of my life that tells me I will be less disappointed if I don't have any expectations. So I have already tried to resign myself, mentally and emotionally, to not being able to have Christmas with the kids in order to prepare myself for that if it happens. But I couldn't imagine not having a tree up if they do come, so I told John yesterday that if he felt like carrying the tree down from the attic, I would get it decorated today. He did. I did. And I have to admit that it was well worth the effort.

The problem with my coping mechanism is that by expecting NOT to have Christmas, I am completely unmotivated to prepare FOR having Christmas. I have not done any shopping; not even online. I don't know what I'm getting anyone. And John has another round of chemo on the 29th, 30th and 31st. So my thoughts are distracted by my concerns for him and how he's feeling day to day. I guess it's no wonder I feel overwhelmed.

And then there's the book I have worked on all year and self-published just thirty short days ago...

I haven't done much of anything to promote my book other than talk about it. But this week I was contacted by our local paper, The Murfreesboro Post, and informed that they were planning to do an article this Sunday on my book. Thursday afternoon I met with the lovely young woman writing the piece, Christen Manger. I have been meaning to stop in a local book store all month to see if they would be interested in carrying the book, but it never has been convenient. So I've procrastinated. But knowing this article was going to be in the paper this weekend, I decided to stop procrastinating.

I went in Hastings yesterday to inquire about their interest in carrying the book. I think part of the reason I had procrastinated was because I expected red tape. I just assumed the person I would need to speak with wouldn't be there, I'd have to jump through some hoops, make more than one attempt, etc. I was lacking in drive to push the book. But they were not only helpful and positive; they were enthusiastic about carrying the book. They took all the copies I had in the back of my vehicle and I signed an agreement. I was also offered the opportunity to do a book signing next Saturday (the 19th), which should be fun.

My own perosnal first printing was 300 books and I'm down to about fifty copies. Amazon has been selling books, too. I have three five star reviews and several nice comments on my website's GUESTBOOK. These are just a fraction of the comments I have received privately via email and Facebook. I have even spoken to several readers on the telephone. I would love to be able to share comments from the letters I have received. But I understand and appreciate why most people would rather share their feelings and opinions privately. Don't worry. Anything you have shared with me privately will remain private. Your encouragement and support has been such a blessing! I look forward to sharing a link to the Post article tomorrow.

And maybe now that my tree is up I can get fully into the Christmas spirit for the next couple of weeks!
Email Post