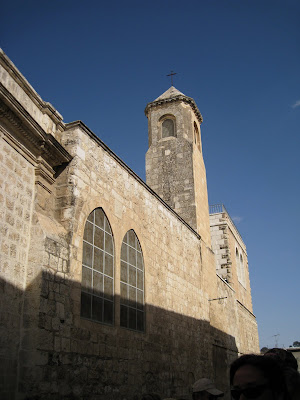 The Church of St. Anne is a 12th-century Crusader church, erected over the traditional site of the birthplace of Anne (Hannah), the mother of Mary. It is an excellent example of Romanesque architecture.

The church is right next to the Bethesda Pool, believed to be the site where Jesus healed a paralytic (John 5:1-15). Here you can see ruins of a Roman temple to the god of medicine and remains of a Byzantine church built over the temple.

Saint Anne's acoustics, designed for Gregorian chant, are so perfect that the church is virtually a musical instrument to be played by the human voice.

I have been trying to upload a video all weekend with no success. I have three wonderful video clips of Heather and also Charlie singing in St. Anne's. You can hear how magnificent the acoustics are. And for a while, we were the only ones in the church. Heather sang, "Lord I Believe in You" and "How Great is Our God." If memory serves me (without checking), Charlie began singing, "How Great Thou Art" and we all joined in with both of them. It was another special time of praise and worship. I really want to share one or two of those videos if I can ever get the Internet and my computer to cooperate. I first tried using Blogger to no avail. And now I have registered with YouTube. But it just seems as though it uploads forever with no end and I never do wind up with an uploaded file. I will get it figured out and posted eventually!

This morning I had this Daily Thought in my email and I thought I would share it. Romans 8 is one of my favorite chapters in the Bible, and one I cling to during difficult places. Especially Romans 8:28. Here is what my Daily Thought says about Romans 8 and the assurances God has given to us:

Romans 8 contains five convictions about God’s providence (verse 28), five affirmations about his purpose (29,30) and five questions about his love (31-39), which together bring us fifteen assurances about him. We urgently need them today, since nothing seems stable in our world any longer. Insecurity is written across all human experience. Christian people are not guaranteed immunity to temptation, tribulation or tragedy, but we are promised victory over them. God’s pledge is not that suffering will never afflict us, but that it will never separate us from his love. --From "Men Made New" (London: IVF, 1994), p. 259.
Email Post