An Update to My Previous Post on Switching Gears 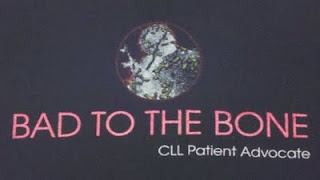 Dr. Flinn called John yesterday after personally reviewing all of John's test results (blood work and scans), researching other patient experiences with Idelalisib, etc. He was out of town at a conference at our last office visit and our discussion of changing directions was with his nurse practitioner. She was reporting the lab and scan results to Dr. Flinn by phone and advising us of results. But she had also told us that Dr. Flinn would be calling to talk to John personally before his next visit in July.

Dr. Flinn told John that he is only slightly out of remission. After looking at the scans, although his nodes have increased in size they are still very small. And he hasn't had a big spike in his white count. He's just been trending upward very slowly. So it's not that the drug has stopped working. It may just need to be bumped up to the next dose. He is inclined to think that may put John right back into remission and after John said he would prefer to try upping his dose before moving to another drug (with possible side effects he is not now dealing with), Dr. Flinn said he was leaning that same way in his thinking.

I love love love having a specialist who discusses decisions with us and is open to hearing the patient and caregiver's thoughts on these decisions! I never fully grasped why we couldn't try to increase the dose first but when I asked if that was an option, the nurse practitioner had shaken her head no with an expression that I perceived as "definitely not an option." So I didn't press it. But I did hope that Dr. Flinn might offer that option when we spoke in person.

When John told me about his conversation with Dr. Flinn yesterday, I was so relieved. I know there are other drugs and we may still have to transition to something else at some point. But I'd love for John to get the maximum benefit and length of time from the drug he's successfully taken (without side effects) for the last five years. And I don't want to transition prematurely. I trust Dr. Flinn's guidance and if he did not advise staying with Idelalisib, we'd go with his expertise. But it was a great relief to me for Dr. Flinn to say he agreed that increasing the dose was an option that might do the trick (for now, at least).

I knew you'd want to know this happy news! Thanks for caring!

justme said…
Great news, Shari! Makes sense to me since John has been on the smallest dose possible up to this point, right?
June 26, 2015 at 6:38 AM