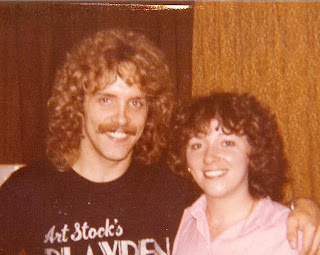 This picture of John and Lillian (taken in the 70s) was given to us yesterday. I had to share it on my blog. Are they not beautiful???

When I look at pictures like this, I so wish that I could have known John and his family earlier in my life. Of course, you cannot argue with God's timing. And we both realize that we appreciate each other more because of what we've been through. But as I was telling John on the way home from Evansville, I feel like I'm a real part of his family. I found a family in which I truly fit.

Although I love my immediate family, I never felt like I belonged. I was different from my parents and brothers. I was emotional. I was expressive. I was loud. I needed to communicate more than anyone else in the family. And my perception was that I was a bother. I know it's a cliche' but I felt like a square peg trying to fit into a round hole. In years past, I never felt that I was the daughter or the sister that they would have chosen. (Today, I believe that I AM the sister and aunt my youngest brother would choose. But we are eleven years apart in age and our relationship has blossomed the most in the last ten years.)

From the first day I met John's family, I was no longer a square peg. I had found this crazy, warm, funny, loud, welcoming family where I fit right in. His mom has told me that until she met me, she was very concerned about how quickly John was getting serious about his new girlfriend. She tried to get him to take it slow. But she says that the day she met me, she stopped worrying. Lillian said the same kinds of things to me. They told me that I was the best thing that had ever happened to John (there is no greater compliment you can receive from your husband's family). And then the brothers said over and over (in my presence), "Johnny finally got it right." I felt kind of like Sally Field ("You like me! You really like me!") It was great. It still is.

None of us will ever forget the first day I met the whole family. It was July and we were all sitting outside on Marian's back patio. John and I got up to walk in the house. We were arm in arm and I failed to see a little drop off between the sidewalk and the driveway. I lost my balance and took John down to the ground with me. It was not just a stumble. It was a tumble. And it even hurt a little bit. But we couldn't stop laughing. And John told me over and over that what he loved most about that moment was that I could laugh at myself and the day wasn't ruined because I had embarrassed myself. I had no idea then, but it really was the perfect way to make my official entry into his family.

This weekend was really special in spite of the sad circumstances. Yes, there were tears. But there was so much love and laughter and camaraderie. On the way home I told John how much his family means to me. I am not just an in-law. I'm one of them. I truly belong in this family even though I don't share their gene pool.

I'm proud to be a Howerton. Not because they are a perfect family without any problems. In that sense, they are no different from any other family. But I love and treasure the camaraderie, the acceptance, and the family bond that now includes me.

Yesterday, Marian found a newspaper clipping from an interview Lillian gave in 2002. We are going to have it copied and laminated for the rest of the family. The article began with her being asked for "Three words that best describe you...." Lillian responded, "Friendly, funny, loud." There were a lot of words she could have chosen. And it struck me that by including loud as one of three, she was making a statement. She was okay with it. Unlike me, she didn't consider being subdued in any way superior to being loud.

Many of us took turns sharing our memories of Lillian as a part of her service Saturday. I confessed that I am also one of those loud, passionate, extroverted kind of persons. (I always wished I could laugh a little softer.) But when I met Lillian, I met someone who laughed louder than I did and was bolder than I had ever been. I remember telling John the first time I met Lillian, "Your sister and I are going to be buddies."

And we were. As I said at her service, we loved each other unconditionally. That is not to say we never got on each other's nerves. We were always so brutally honest with each other that I'm certain I may have said things that didn't always set well with her. And I didn't always agree with her opinions or choices. But we never had even the slightest falling out over anything. There was just this wonderful "I love you just the way you are" feeling between us. It's a gift she gave me that I will always have ... and will always cherish.
Email Post

I must say, I think this is my favorite post! My eyes just filled with tears of happiness. What a beautiful blessing! Thank you for posting! I love you!
November 8, 2010 at 10:52 AM

Shari said…
Thanks, Jannelle. I love being able to preserve what I'm feeling and thinking in the moment for future reflection. That is one of my favorite things about keeping a blog. And because it's public, I can receive feedback.

Michelle said…
I feel strange commenting here because I don't know you. I found your blog on Lillian's Facebook page.

Lillian and I worked together at Aztar and when she went to Rogers she took me with her. After she went to Reno we lost touch and I now wish I had made more of an effort to see her when she came back.
I will continue to pray for your family as you still have many fights ahead.

Shari said…
Michelle, thank you for leaving this comment and thank you for your prayers. Please don't feel strange about reading my blog or commenting in spite of not knowing me personally. My blog is public for anyone who finds it. Lots of people have landed here for various reasons, but all are welcome.

None of us were expecting to lose Lillian this quickly. I thought she had months left, not weeks. But she went peacefully in her sleep and it is a comfort that she is no longer suffering. Thank you for visiting my blog.
November 8, 2010 at 5:08 PM

Danny Bryant said…
that picture makes me glad i met him when i did.

Well, considering I'm your mom, I could imagine how you might have had reservations about the rock and roll John. But all his old friends go on and on about what a good person he was EVEN in the seventies. : )